I don’t know how or when this happened.

Now the neighborhood health food store isn’t particularly a place I really want to belong, and it isn’t that I felt I belonged there anymore than anyone else. I guess all I am saying is that I didn’t feel like an outsider. I didn’t feel as though I were a fraud, or a ghost in a place where real live people live their life. I discovered that it is comfortable to belong. I felt the gift that this life really is.

I think as an adolescent I found myself constantly trying to fit some mold that I imagined would make me acceptable and lovable to the people I wanted to love me so much. Somewhere along the line I got rather hung up on the idea that I needed everyone to like me, even the people I tried so hard to pretend I hated. I got stuck in that state for a long time. As a result, I spent so much of my time trying to pretend my life was something other than what it really was; I missed out on a lot.

A friend of mine told me this summer that when he stopped trying to be cool, he became cool. So naturally I tried to be just like him for a few days. It didn’t work.

I used to think adulthood was the death of the heart. I saw these grown-ups so involved with the business of living, that I thought they had lost the capability of feeling. Of course this was because I imagined feeling was another word for experiencing pain or longing. I had all these ideas. I knew so much. I was so confident that everything I guessed at was a fact. I was wrong.

My grandpa once taught me that one of the most valuable expressions he ever learned to say was “you may be right.” I believe now that is how he became probably the wisest man I have ever known. The more he learned about life, the more he was open to let other people have their beliefs and to learn what he could from them while being helpful all the time.

Today while in the neighborhood health food store, I realized that this is my life. I am not the center of the universe, nor am I absent. I get to live this life today not because of the choices I have made, but because of grace. My responsibility is to live this life to the fullest, to be present, and to experience every moment, and every situation as a part of this amazing thing we all share. I don’t know that I deserve all that I have, or all I have been given, but I am certainly going to make good use of it. I love my life, and all the people in it.
Posted by Constitutionally Incapable at 11:48 AM No comments: 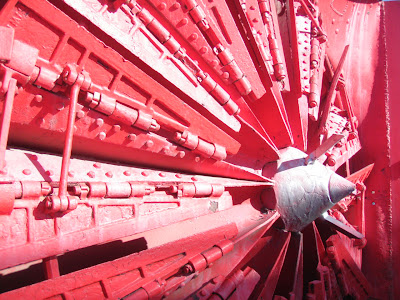 Posted by Constitutionally Incapable at 7:32 PM No comments: